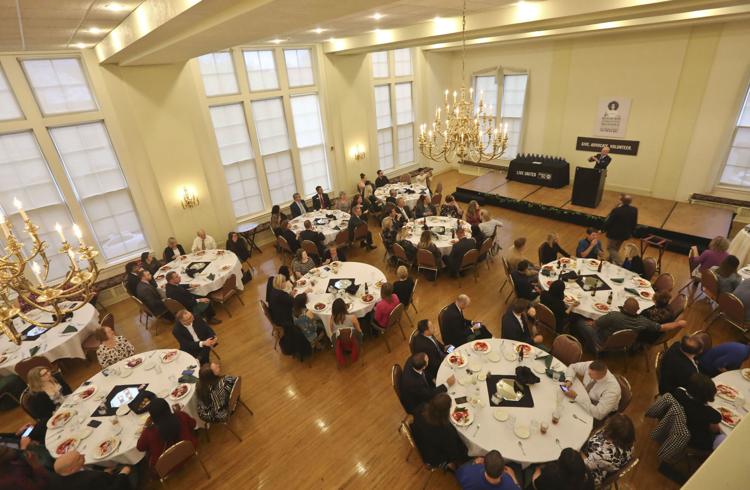 DECATUR — More than 120 community members gathered Thursday evening to recognize the people and organizations that have invested in United Way of Decatur and Mid-Illinois' mission of making the city a better place to live.

During United Way's annual meeting at the Decatur Club, individuals and companies received awards for their efforts to raise funds and to volunteer time toward the non-profit organization's 2017 campaign. The campaign goal was $1.6 million.

"We have great relationships with so many businesses," said Debbie Bogle, executive director of United Way of Decatur and Mid-Illinois. "Over 200 businesses in this community that allow us to come in and talk about what's happening in this community, and to talk about their investment and how it's creating change in people."

The following people and businesses received awards during the meeting:

Volunteer of the Year award

Campaign of the Year award

A Company That Cares award

"People put so much work into having a campaign, and getting their team involved and their employees involved," Bogle said. "They do some amazing things and we want to celebrate that."

In other business Thursday, United Way board member John Guymon was named chairman of the board. Guymon, vice president of refined oils operations for Archer Daniels Midland Co., will succeed Brian Byers as chairman. Byers said he served in the role for 2½ years.

"It's bittersweet," said Byers, vice president of development at Neuhoff Media. "I loved it, I'll miss the staff and Debbie, but I'll still be a huge United Way supporter and my company will be. It's just time to step back a little with the board-level duties."

Looking back on his tenure, Byers said some of the United Way's accomplishments that he's most proud of being a part of include the organization's move to its current location at 201 W. Eldorado St. and the implementation of a 211 telephone information and referral service for Macon, DeWitt and Moultrie counties.

Before officially passing the torch to Guymon, Byers also took a moment to recognize the United Way staff for its hard work and dedication in the wake of a weeks-long absence for Bogle — who was hospitalized in January after having emergency surgery for a brain aneurysm.

Guymon did the same during his first address as board chairman: "Debbie, glad to have you back."

Speaking after the meeting, Guymon said he plans to continue taking the path set by United Way's core community efforts and functions. "It will just be more of the same based on where we established our priorities in the last couple years."