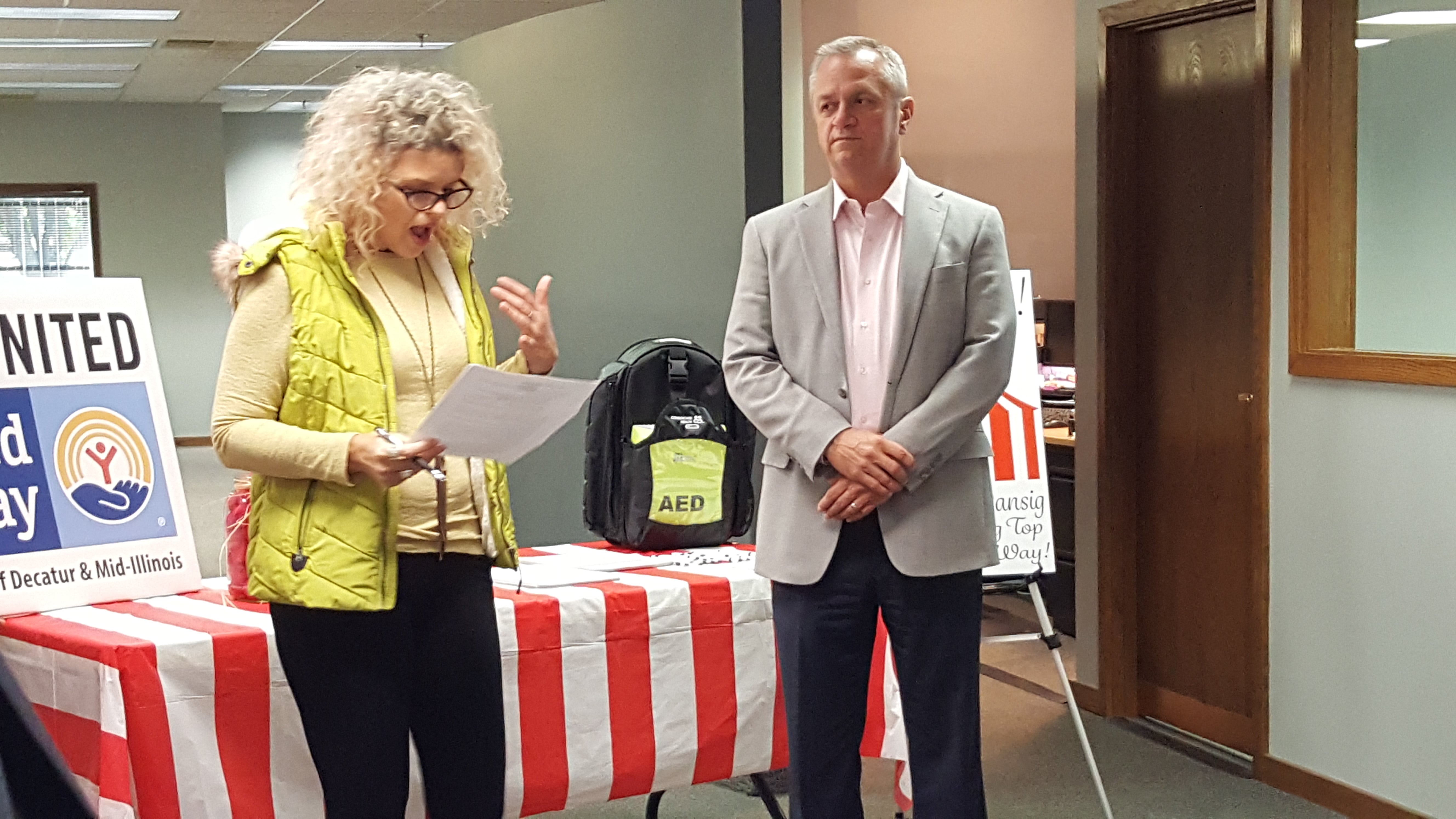 "October 17 – The United Way of Decatur and Mid-Illinois kicked off its annual campaign Wednesday with an afternoon event at Consociate Dansig, which in turn made a special presentation to the agency.

“Campaigns happen all year round, but we like to officially kick it off and do some fun things,” said United Way executive director Debbie Bogle. “They have such a great campaign here. This year is the carnival theme; they’ve done a Las Vegas theme, a superhero theme. They do a lot of fun things with their campaign to make it a fun event for their employees.”

“From our perspective, it’s been a great way for us to give to the community. The reward our employees get from participating in this is as great as the money we give to the United Way,” said Reynolds, noting Consociate has surpassed $100,000 in lifetime contributions, including $17,000 last year alone. “We’re looking to double that in the next few years.”

The event’s special moment came when Reynolds presented Bogle and the United Way with an Automated External Defibrillator (AED) in the name of Brian Pierce. Consociate’s Director of Marketing, Pierce experienced a heart issue during the WSOY Community Food Drive earlier this month and use of an AED on the scene helped save his life.

“As a company, we installed those in our three buildings about a year ago and went through the training,” said Reynolds.“We started thinking of a way to honor what happened to Brian and try to raise awareness, but also give some comfort to people when they’re at these larger community fundraising events or social events that there would be an AED on site.”

Bogle called the AED a great donation to the United Way and the Community.

“We were at the Food Drive when that happened and it’s a very scary thing,” she said. “Just to be able to have this opportunity, and Consociate is awesome for being able to donate that and give people the opportunity to save somebody’s life. It’s really important.”

With a goal of moving individuals to self-sufficiency, the United Way relies on community support and October is generally the campaign’s busiest month. Bogle said this year’s campaign is off to a “great start,” highlighted by a preliminary campaign total of more than $432,000 from the Caterpillar plant in Decatur.

“Caterpillar is such a great organization, and we will have several new campaigns this year throughout the communities,” Bogle said. “Things are looking really good this year and we’re excited about the campaign.”