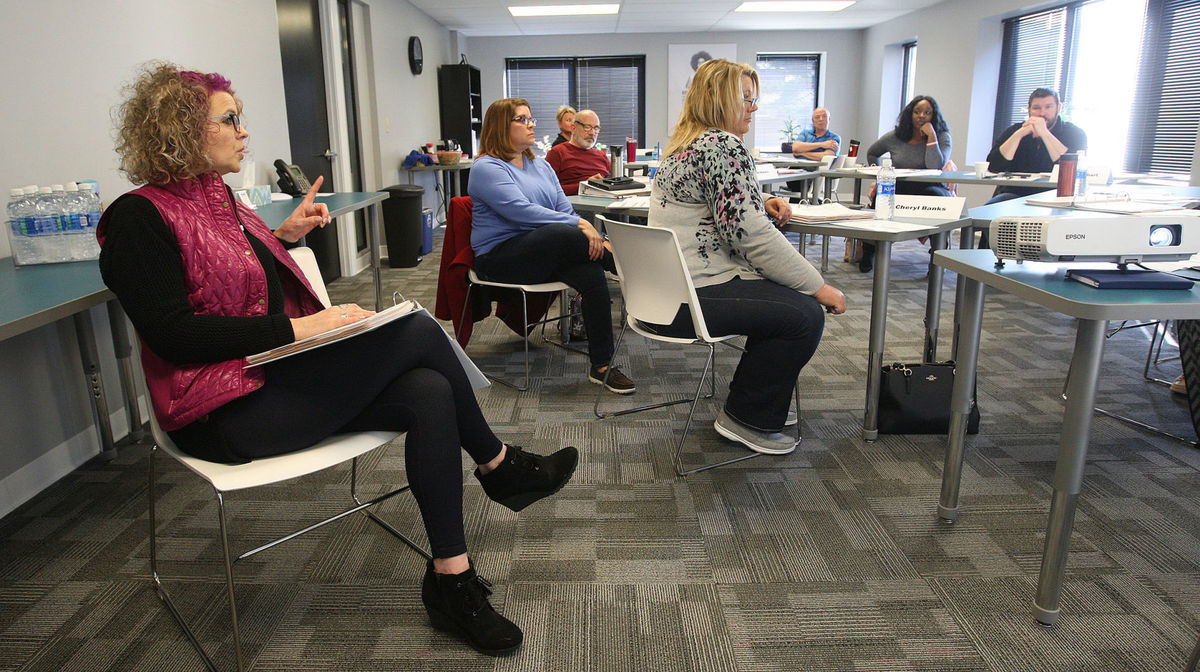 DECATUR — From time to time, Debbie Bogle still lists to herself animals that start with the letter M: monkey, mouse, mongoose, moose. She’s repeated the names periodically ever since she suffered a ruptured brain aneurysm that left her in intensive care for two weeks.

Bogle, the executive director of United Way of Decatur and Mid-Illinois since 2012, started making the lists while she was hospitalized after emergency surgery Jan. 6. A speech therapist asked her to name as many animals that started with the letter M as she could in 60 seconds. She named three, which upset her because she thought it indicated something was wrong with her cognitive abilities.

But after she asked her visitors at the hospital and later searched Google, Bogle realized not many animals start with the letter M. She relaxed. Her brain was fine.

“It really is a miracle,” said Bogle, 48. “The day I was leaving, the surgeons came back in and said, 'We wanted to be here because people don’t walk out of the hospital after this.”

She's now back at work, just in time to oversee the first week of the United Way's updated community approach to deciding what nonprofit organizations and social service agencies will receive the money raised through a massive donation drive. The campaign goal was $1.6 million.

A brain aneurysm develops when a thin spot on a blood vessel in the brain fills with blood and balloons out, according to the National Institute of Neurological Disorders and Stroke. Causes vary and can include genetic disorders, head injury, infections and high blood pressure, among others.

When they burst, aneurysms bleed into the brain, creating the potential for stroke, permanent nerve damage and other serious complications. An estimated 40 percent of people whose aneurysms rupture do not survive the first 24 hours, according to the national institute.

Reflecting on what happened can be emotional for Bogle.

“It was very traumatic,” she said. “But I am lucky. I am lucky just to be alive.”

Bogle said she looks the same, except for the shaved part of her curly blonde hair where a tube was connected to her brain. She’s dyed the section of hair pink.

“People aren’t expecting me to be normal. They think I can’t walk, I can’t talk,” Bogle said. “They see me and think ‘I didn’t know that you’d be able to work again.’”

Some people can live with a brain aneurysm for their entire lives without knowing it or experiencing ill effects. Most people learn they have an aneurysm for the first time when it bursts, which was the case for Bogle. Her aneurysm burst suddenly while she was exercising at the Decatur Indoor Sports Center. At first, she thought she strained herself doing sit-ups, but when she stood up, she passed out.

Bogle said she is thankful for the DISC workers and a few EMTs and firefighters who happened to be at the facility. They sprang into action, calling 911 and helping Bogle until the ambulance came, she said.

First, Bogle was taken to Decatur Memorial Hospital, where doctors did an MRI and saw the aneurysm. She was transferred to Memorial Medical Center in Springfield and taken into surgery.

“Everybody did the right things. When people go with a headache and things like that, the first reaction is not to do an MRI,” she said. “They just did everything right.”

Brian Byers, chairman of the United Way board and a longtime friend of Bogle’s, said he couldn't believe it when he got the phone call about what had happened. He didn't know whether Bogle would be OK.

“I don’t throw the word 'miracle' around very often, but to me this is exactly what it is,” said Byers, vice-president of development at Neuhoff Media. “It is amazing. She has done so much for this community.”

A post on the United Way Facebook page after Bogle's surgery explained what had happened, and 70 people commented with concern, good wishes and promises to pray for her speedy recovery.

Bogle returned to work a few weeks ago. Among her first tasks is overseeing changes to the process that United Way uses to allocate money collected in the annual community investment campaign.

In a three-year study, the organization previously identified five key areas as funding priorities. Volunteers hear presentations from agencies and visit their facilities, then choose to fund organizations with the best outcomes that meet the identified goals.

The new process will focus more on the outcomes of organizations when deciding to award monetary support, Bogle said. As part of the presentations, the leaders were asked this year to present specific achievements and improvements they make in the community, she said.

The five key areas are:

For the education line of effort, some goals are getting more children access to preschool, increasing high school graduation rates and college readiness scores, lowering unemployment rates for 17- to 25-year-olds and ensuring more people earn college degrees. These goals overlap with the adult education and training line of effort.

For example, the outcomes for the Boys & Girls Club show the importance for the children to complete their homework and build character for a successful impact on their overall education, said Executive Director Bruce Jeffery. “We’ve been a United Way agency for 30-plus years,” he said.

Jeffery said he is happy Bogle is back and able to continue her work.

“Debbie is great,” Jeffery said. “I had the kids make her a huge poster, just to show our appreciation for what she does for the community.”

The education volunteers performed site visits on Monday and met to decide on Friday how to invest the community's money. The process will repeat for each of the major priorities.